Fags in the Fastlane is a the leader in the current renaissance of Ozploitation movies.  Its’ recent debut at Melbourne’s grand old Astor theatre was packed to the rafters, with the crowd queuing up past the shopping block to get in.  I was there, and when people were leaving at the end of the night, they were excitedly babbling on about the film like chipmunks on speed.

The official description of FITF is as follows:

“When Beau and his herculean sidekick set off to avenge a spree of violent attacks on his fellow gays, he is waylaid on a vital mission for his beloved mama, Kitten when her GILF bordello is robbed by the giantess leader of a grotesque burlesque show. With the help of a lethal cross dressing Persian Princess and a Bollywood eunuch assassin, this unlikely team of avengers set off to retrieve the lost booty in a full-throttle, rock n roll feast of camp destruction and dangerous dance numbers.
Will they be able to recover Kitten’s beloved jewels and magical golden phallus? They’d better!”

This is Josh (Sinbad) Collins debut as a director for a feature film, and it’s a beauty.  If you are looking for over the top characters, strange gangs battling it out and lots of bad taste action, then this is it.  The stylised opening reminds me of the intro to Ed Woods’ “Glen or Glenda,” after the Bela Lugosi monologue.

Chris Asimos stars as the cocky, cockslinger, Sir Beauregard Esquire, or Beau.  His partner, Lump, played by Matt Jones is reminiscent of Roger Ward’s “Chief Guard Ritter” from the 1982 Ozploitation classic, Turkey Shoot.   The two are hilarious as they make a high camp superhero duo that romp through one over the top scene after another, delivering the cheesiest lines imaginable as they get up to all sorts of “wanky panky.”  Sasha Cuha makes the transition from theatre to his first feature film seamlessly and plays Salome.  Along with Oliver Bell as squirt, they complete our band of heroes as they fight their way through numerous crazy adventures to recover Kitten’s lost fortune, and of course, the golden cock!

Kitten Natividad plays Kitten, the cockslingers’ mother.  She reminded me a bit of Mother Firefly from The Devils Rejects.  Kitten herself is a veteran of B grade films, having starred in many Russ Meyer movies and she gives Fags InThe Fastlane a real life tie-in to the very genre it pays homage to. 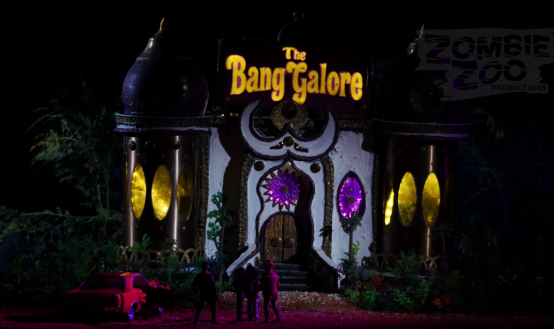 Stuart Simpson is the cinematographer and you can see his stamp all over this with some of the genre stylisations.  The miniatures used throughout are the work of Josh Collins and Tor Hellender. Both work well together to give a bit of a Thunderbirds feel to many outlandish scenes.  Some of the humour comes from using models and dolls where they actually aren’t needed at all.  I’m not going to spoil that for you but will just leave that as something to look out for.

The sound track often has a rocky, late 60’s vibe complete with Hammond organ riffs. It enhances some of the psychedelic, trippy, wtf scenes, such as the weird clay animation swamp scene with ultra violet lighting.  All up, this is a fairly hard and fast paced movie with so much going on that it definitely took me a second watch for some of the major parts of the story to sink in.  Come to think if it, I might need to watch this a third time too, but will wait for my heart rate to slow back down to normal first. 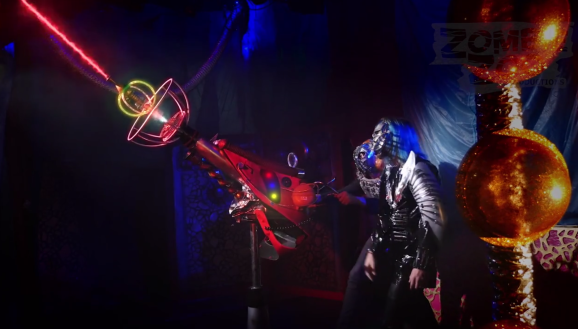 There’s a little bit of everything in this movie, from song and dance scenes, to fight scenes, sex and gore, animations, crazy gadgets, ingenious traps, weird drugs, third world pornographers, freak show mutants, monsters, disco freaks, Sci-fi guns ….. and more, all brought together with relentless dad joke type innuendo.  That is, if your dad is gay.

To quote another famous Aussie icon, who happens to be gay …. “Do yourself a favour” and go out and see this one.

David Black is an actor, director, writer, producer, musician and cartoonist from Melbourne Australia. He is best known as being the man behind the horror rock band, Darkness Visible. View all posts by ozindiecinema